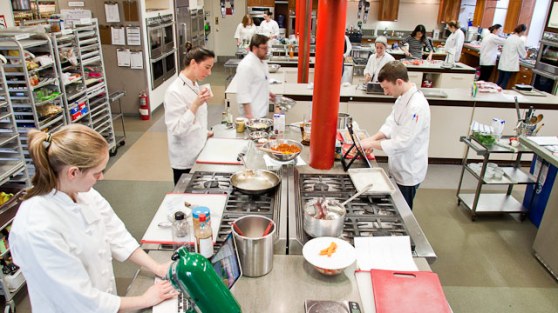 We’re a very real 2,500-square-foot kitchen located just outside of Boston. It is the home of Cook’s Illustrated magazine and Cook’s Country magazine and is the Monday-through-Friday destination for more than three dozen test cooks, editors, food scientists, tasters, and cookware specialists. Our mission is to test recipes over and over again until we understand how and why they work and until we arrive at the “best” version.

We start the process of testing a recipe with a complete lack of conviction, which means that we accept no claim, no theory, no technique, and no recipe at face value. We simply assemble as many variations as possible, test a half-dozen of the most promising, and taste the results blind. We then construct our own hybrid recipe and continue to test it, varying ingredients, techniques, and cooking times until we reach a consensus. The result, we hope, is the best version of a particular recipe, but we realize that only you can be the final judge of our success (or failure). As we like to say in the test kitchen, “We make the mistakes, so you don’t have to.”

All of this would not be possible without a belief that good cooking, much like good music, is indeed based on a foundation of objective technique. Some people like spicy foods and others don’t, but there is a right way to sauté, there is a best way to cook a pot roast, and there are measurable scientific principles involved in producing perfectly beaten, stable egg whites. This is our ultimate goal: to investigate the fundamental principles of cooking so that you become a better cook. It is as simple as that.

You can watch us work (in our actual test kitchen) by tuning in to America’s Test Kitchen or Cook’s Country from America’s Test Kitchen on public television, or by subscribing to Cook’s Illustrated magazine or Cook’s Country magazine, which are each published every other month. We welcome you into our kitchen, where you can stand by our side as we test our way to the best recipes in America.

Christopher Kimball founded Cook’s Magazine, a national magazine for cooking hobbyists, in 1980 and served as publisher and editorial director through 1989. In 1984, Mr. Kimball founded the Who’s Who of Cooking in America, which was initiated to honor the leading American chefs, restaurateurs, vintners, food writers, and food producers. In 1993, Mr. Kimball relaunched Cook’s Magazine as Cook’s Illustrated; more recently, he founded Cook’s Country magazine. Mr. Kimball serves as publisher and editor of both magazines. Mr. Kimball is also the host of America’s Test Kitchen, the top-rated public television cooking show, and host and executive producer of Cook’s Country from America’s Test Kitchen, which debuted in September 2008. Mr. Kimball is a regular contributor to The Today Show and has been featured in many publications, including The New Yorker, the Wall Street Journal, the New York Times, People Magazine, the New York Times Book Review, the Washington Post, and the Los Angeles Times. He was inducted into the Who’s Who of Food and Beverage in America in 1996. He is also the author of The Cook’s Bible, The Yellow Farmhouse Cookbook, Dear Charlie (Christopher Award Winner), The Dessert Bible, The Kitchen Detective, and Fannie’s Last Supper.

For media and sales inquiries